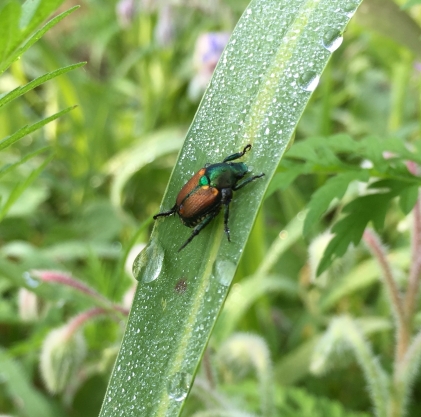 Ugh it is a terrible Japanese Beetle year!! Well, good for the beetles I guess!  Here is a video I pulled together with some ideas in controlling and dealing with Japanese Beetles in your yard.

I think the most effective way to deal with Japanese Beetles is to simply gather them up and kill them by hand. It seems time consuming, but you can make a real dent in the population.

I use a tub with a lid like a Chinese food container. In the early morning, the beetles are slow and drowsy so they are rather easy to just bonk into the tub. I give it a little shake as I gather them to keep them disoriented so they don’t fly out as I open it to bonk the next group.

And another thing to remember is that Japanese Beetles have a rather short adult life span. And at this point, their time is almost up.

So don’t despair. Most perennial plants and vines and bushes will recover just fine even if their leaves are very holey or laced.

Besides simply gathering them, you can also allow some very common weeds to grow. Smartweed or any of the Polygonums are particular favorites of Japanese Beetles. They are easy to weed out and if you let some grow around your garden, you will see tons of Japanese Beetles on the smartweed and very few on the other garden plants.

The flower of the Polygonum or Smartweed

Another common weed that attracts Japanese Beetles is Pigweed or Pig Amaranth. If you have it in your yard or garden, at least you can feel that it is luring Japanese Beetles off other plants. I wouldn’t purposefully plant these or knowingly let them set seed in your garden though! They are tough weeds. 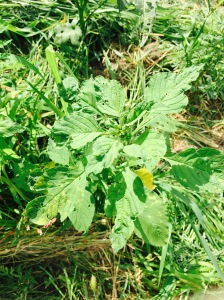 I don’t think the kelp powder I recommended for the Flea Beetles would work very well to repel Japanese Beetles – they are bigger and stronger and seem to just brush the kelp aside…. I don’t think the Kaolin Clay will work very well either for that same reason – although if you apply enough of either you probably could hide the plant pretty effectively.

Diatomaceous Earth is a powdery substance made up of the tiny bodies of an ancient type of algae. It is very effective on soft bodied insects – it basically acts like little razor blades on a microscopic level … but on a big armored beetle like a Japanese Beetle, I don’t think it would be very effective.

Milky Spore is a bacteria that you release into your lawn in the fall – it attacks the grubs or larvae of the Japanese beetles during the course of the winter and spring. So it can lessen the amount of beetles that emerge and eat your plants in the summer. I used it once and thought it worked. It is a long term plan – supposedly the best results can be seen in 2-3 years. I don’t know though – I think there are natural things currently in your lawn – especially if you have been treating your property naturally – that control the Japanese Beetle population. I find that they go in phases – one year lots of beetles the next year not so many … so now I think maybe the Milky Spore didn’t do anything – or at least I don’t know how one would prove it or know for sure it did something … maybe worth a try, maybe not worth spending money on…

So anyway – luckily, we are getting close to the end of the Adult life cycle so in a week or two they should be gone….

And Chickens love them…. another great reason to get chickens!